It has been a memorable year for MBS Environmental in 2018.  Looking back at the year that was, we have achieved a lot and seen many new faces join the MBS team (Spencer Shute, Justine Hyams, Jacob Azzarello, Tom Robson, Richard Olsen and Stephanie Stack).  Spencer has continued his role as lead consultant on an Exmouth-based project that he’d previously been involved with before joining MBS.  The project, to be formally assessed at the State and Commonwealth levels, has involved the completion of a number of technical studies involving benthic habitat mapping, marine fauna surveys, stygofauna sampling and a visual impact assessment.  Jacob has proved himself a capable addition to the MBS team in his willingness to embrace the highs (undertaking marine studies in Exmouth Gulf during the Humpback whale southern migration) and lows (preparation of the sixty maps….and counting…..for the PER) for the project. The extended MBS Family also grew as Kirsi Kauhanen’s daughter Ella joined the world.  Not to leave it there, Kirsi also completed her PhD this year!

This year two of our own, Mike North and Jess Li, presented at the GEMG Conference in Kalgoorlie, and the MBS team has also been involved in many field trips and site visits, from Exmouth to Esperance, the Musgrave Ranges and to China. Our project profile has been diverse this year and we have been privileged to work on some exciting large greenfields projects such as Sheffield’s Thunderbird Mineral Sands Project,  the OZ Minerals West Musgrave Nickel Copper Project, the Element 25 Butcherbird Manganese Project and the Danakali Potash Project in Eritrea.  We have been heavily involved in lithium projects across the State from mining, primary and secondary ore processing. MBS looks forward to continuing work in the Kimberley in 2019 with the Shire of Broome recently awarding a contract related to the Cable Beach Master Plan.  Other standout achievements for the team during the year include:

Thank you to all our families, clients, and peers for a wonderful year. 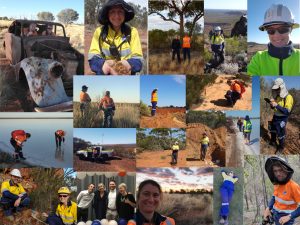